Food Table: How Many Calories Do Vegetables Have? 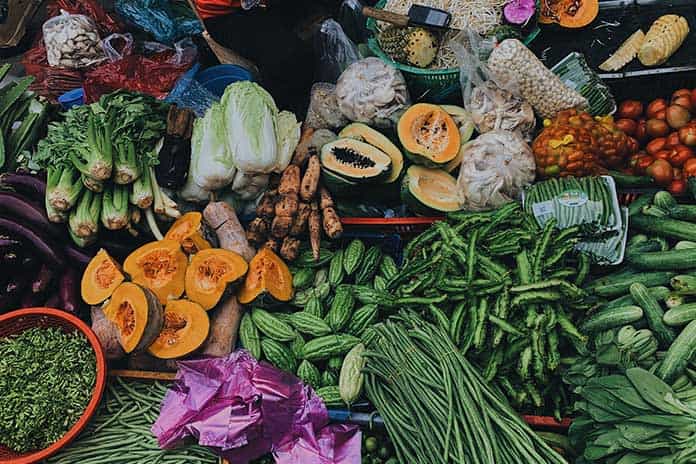 You don’t have to look for the calories in vegetables because many vegetables contain so little of them that it’s not worth it. Some vegetables are so low in calories that they contribute to a negative energy balance when consumed, which helps a lot with weight loss.

Of course, vegetables always contain positive calories, but some are so few that more calories are consumed than are included in the vegetables themselves. Such varieties are the ideal prerequisite for losing a few pounds. You can eat as much of them as you want, you won’t gain weight – provided you haven’t made them with a thick dressing or tossed them in butter.

According to the recommendations of the German Nutrition Society, we should eat three servings of vegetables and two servings of fruit every day. We are well supplied with vitamins, minerals, and secondary plant substances if we stick to them.

The vegetable with the fewest calories is the cucumber. It consists almost entirely of water and is therefore simply altogether healthy for the human body and provides just 12 kcal per 100 g.

In the raw state, there are also.

Although they are suitable for burning calories, they must be prepared raw to do so. When cooked and with the addition of oil or other fat, the calorie content changes naturally.

For example, spinach, Swiss chard, cauliflower, beans, carrots, etc., should only be prepared with little fat. To maintain the negative calorie balance for weight loss, one should avoid adding cream or flour to thicken a sauce.

Vegetables high in calories are often put on the ‘forbidden’ list in low-carb diets, for example. These include, for example:

Exclusively Low-Calorie Vegetables Are Not Healthy

In principle, there is no such thing as good or bad vegetables. Not only are all types of vegetables low in calories, but they also provide fiber and other essential nutrients and are very healthy and can be enjoyed without a guilty conscience.

Of course, when eating vegetables, one shouldn’t just pay attention to the calories. For example, those who only eat cucumbers the whole day do a kind of fasting cure, in which case they drink enough fluids but neglect vitamins, minerals, or trace elements. Those who eat mainly low-calorie vegetables risk developing deficiency symptoms that can put a heavy strain on the organism.

It is better to opt for a healthy and balanced diet that provides the body with all the essential nutrient components.

Also Read: 7 Low Carb Alternatives You Should Know About

Avoid Raw Vegetables If You Have Digestive Problems

It is not fundamentally true that raw vegetables are healthier than cooked ones. However, when eaten in the evening, raw vegetables harm digestion for many people. They get digestive problems; some even get cramps because the stomach essentially stops working overnight. The vegetables in the stomach begin to ferment, causing gas and pain.

In addition, there are vegetables whose ingredients cannot be thoroughly enjoyed by humans in their raw state. Tomatoes, for example, contain the substance lycopene, which we can absorb much better in cooked tomatoes. It binds the harmful free radicals in the body and is even said to have a cancer-preventing effect.

Potatoes, rhubarb, and legumes such as lentils and beans must also be cooked before humans can consume them. However, you have to be careful to find a gentle cooking form that does not destroy the vitamins contained.

Vegetables that are high in oil, such as corn, contain many calories. Vegetables with high carbohydrate content, such as potatoes, are also significantly higher in calories than others.

Low-calorie vegetables are low in oil and low in carbohydrates and contain water instead. You shouldn’t worry about the calorie content of vegetables if you eat them in abundance. Avocado * is an exception. It is very fatty and has a significant impact on calories.

* If you look closely, however, the avocado is a fruit.

The calories contained in vegetables are also colloquially known as “good” calories because they are based on fiber. In contrast, the “bad” fat calories or trans fats, which the body stores immediately, are hidden in meat.

Vegetables are one of the healthy foods. It contains vitamins and minerals and is suitable for the body compared to many other foods – even in large quantities.

Also Read: The Diet You Must Follow To Combat Against Cellulite

11 Essential Vitamins For Your Body