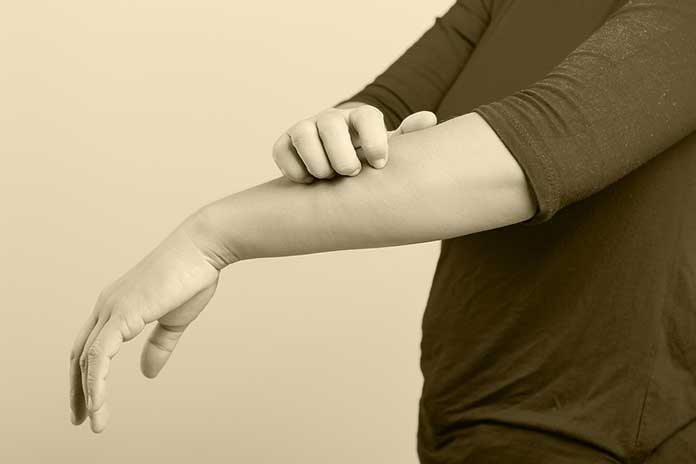 I prefer a bath to a shower. With warm water and a few tablespoons of rice starch. Calendula works well

Allergies, dermatitis, sunburn, psoriasis. But also food intolerances, kidney problems or trivial, excessive sweating. Itching can be associated with various pathologies; it can be localized in a specific part of the body or generalized. It is usually accompanied by redness of the skin and its flaking. What can be done to stop it? Is it possible to avoid creams and medicines bought at the pharmacy?

Itch What Is It

The manifestation of itching is unique: the redness is combined with the desire to scratch the area where we itch. Then there may be other symptoms, such as redness, the appearance of small blisters, and tingling. More than the effect of itching, it is essential to understand its origin. That is: if it is a nuisance due to trivial problems (dry skin, slight insect bite, excessive sweating) or if we are faced with something more complex, a pathology (up to ovarian, breast or prostate cancer ) which manifests itself through itching.

Itching: Scratching Is Not Necessary

Itching is one of the most common skin disorders. It can turn into a problem when it becomes intense because it causes the irrepressible instinct to scratch, resulting in unpleasant consequences. The initial sense of relief you feel is counterproductive. Scratching repeatedly and vigorously can lead to bruises and inflammation, paving the way for annoying infections. Different stimuli can trigger itching and can be associated with dermatological pathologies, but not only. It can also be localized in circumscribed skin regions or generalized. Therefore, to treat it in the best way, it is essential to identify the origin through good dermatological or medical advice and then adopt the appropriate treatment.

Itchy skin can cause numerous discomforts and become frustrating. Fortunately, there are several natural remedies for itching to relieve those who suffer from it. The most popular grandmothers are cold packs, baking soda, apple cider vinegar and colloidal oats.

Also Read: How Long Does A Cold Last? You Should Know These Five Facts

Itching occurs most of the time as a symptom related to a skin disorder or disease. The causes that determine it can be highly different. Itching can, for example, be a symptom of contact dermatitis, a skin inflammation triggered by interaction with allergens or irritants. It can be linked to the presence of seborrheic dermatitis or atopic dermatitis. It can accompany momentary rashes such as hives. In some cases, itching can result from erythema, such as widespread sunburn or an insect bite., which can promote irritative phenomena. In all these circumstances, the disorder is usually localized in specific areas and reveals itself with other symptoms, such as burning, redness, and peeling, which vary according to the present problem.

We have already specified how the treatment of this discomfort should focus on its cause rather than on the symptom. If the natural remedies for the itch do not relieve it, it is better to avoid do-it-yourself measures that could worsen the situation. Instead, contact a professional who, after analyzing your medical condition, may prescribe oral medications or other treatments such as corticosteroid creams and ointments or, finally, phototherapy. Good practices for trying to find relief from unbearable itching – to be combined, perhaps, with the prescribed therapy – are:

Suppose the itching persists for several weeks without localizing in specific areas but involving the whole body. In that case, it can be the manifestation of ailments or diseases not related to the skin. Among the most common causes of itching can be mentioned:

The lack of iron in the body causes the onset of inflammations, manifesting themselves with generalized itching. Anaemia can derive from various causes, ranging from an incorrect diet that does not provide the adequate daily requirement of the mineral to gastrointestinal problems, which prevent the body from absorbing nutrients.

Those who have diabetes have a decreased sebaceous secretion, resulting in dryness of the skin, which can trigger widespread and persistent itching. In these cases, prolonged scratching can lead to abrasions that favour the entry of fungi and bacteria, leading to infections.

Both hyperthyroidism and hypothyroidism manifest themselves with intense itching, among other symptoms. In both syndromes, hormonal imbalances occur that cause changes in the blood, stimulating the nerve fibres responsible for itching.

Some kidney diseases in the early stages may have an itch that affects the whole body, accompanied by discomfort and swelling, among their alarm bells. This is the case of polycystic kidney, a disease in which normal kidney tissue is replaced by numerous cysts, or nephritis, an inflammatory alteration of the kidneys. In these cases, the ability to adequately filter the blood is reduced. Toxins and other body products that should be eliminated in the urine thus return to the bloodstream, causing inflammation and irritation, which results in intense and generalized itching (natural remedies can help relieve it).

Problems affecting the liver such as hepatitis or gallbladder can cause the onset of widespread itching all over the body. In the presence of these disorders, incorrect functioning of the bile occurs, resulting in an inadequate elimination of unwanted products by the body. Harmful fats, acids, and bacteria spread through the blood throughout the body, including the skin, resulting in an irritative state.

Itching can have a psychosomatic origin. In moments of intense stress or strong anxiety, the mind may vent its discomfort on the body, specifically on the skin. The diagnosis of stress itch is generally made when the disorder is not associated with pathological causes but occurs in conjunction with an emotionally difficult period.

Multiple sclerosis, a chronic neurodegenerative disease, and other diseases affecting the nervous system may be accompanied by skin irritation and subsequent itching. Other significant neurological symptoms such as muscle spasms or loss of sensation also occur in these cases.

The itching in pregnancy is due to the hormonal and bodily changes in this delicate moment of female life. During gestation, itching usually affects the breasts, intimate parts and abdomen. Although rarely, gestational herpes and polymorphic dermatitis gravidarum, two types of dermatitis that cause intense itching, can also occur during pregnancy.

How To Calm The Itch

The treatment of itching varies according to the triggering cause. However, some tricks and natural remedies help to solve it or, at least, to keep it at bay:

When To Worry About Itching?

As we have seen, itching is generally not a particular concern. It is easy to deal with it with natural remedies. The situation changes when the itching becomes persistent, it does not recede even with our effective natural remedies. Expansively, it is associated with skin rashes, hives, and excessive swelling. In these cases, the itching becomes difficult to bear. Then you have to go to the doctor, do the necessary investigations and understand which specific pathology is associated with the itch. To act with adequate therapy.

What Tests Should Be Done For The Itch?

Before wasting money unnecessarily on useless tests, which are of no use and are not required, talk to your doctor. He will tell you if and when to do something. In particular, the most frequent tests range from blood tests to allergy tests. The latter serves to identify the allergen that triggers the body’s response and, therefore, the itch that may have a food origin. The blood test that instead helps to have a relatively complete picture of the situation, excluding some pathologies and considering others, is the blood count—a simple and inexpensive test. Only afterwards, and in the case of liver problems, and always on the doctor’s advice, it is possible to proceed with transaminases.