Drinking Properly During Exercise: How To Avoid Dehydration 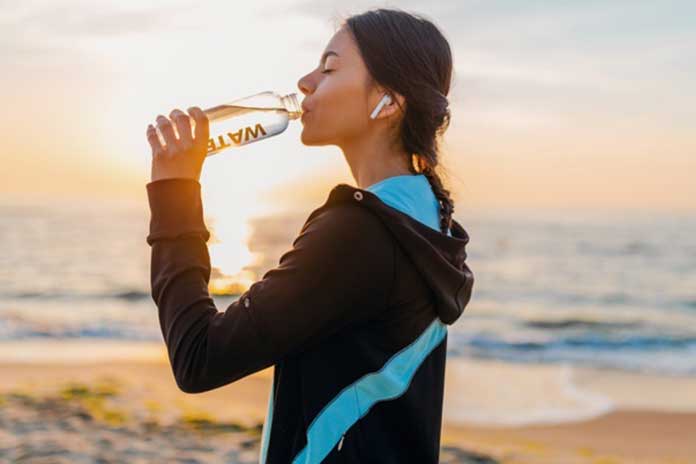 We lose a lot of fluids through sweating during exercise. We have to compensate for this deficiency. Otherwise, we become dehydrated. But when is the best time to grab a water bottle – during your workout or after?

When it comes to drinking during or after exercise, opinions differ.

Some would never start their training without the obligatory water bottle for refreshment in between; others prefer to replenish their water reservoirs only after the workout.

But what is healthier?

Prefer To Drink During Or After Training?

Researchers at Elon University have investigated precisely this with the help of a study. Twenty-three women who jog in their free time had to complete two runs.

Under moderate running conditions, some runners drank 340 ml of water while eating; the other part rinsed their mouths with water every three kilometers without swallowing.

There was not much difference between the runs with and without water. Water drinkers sweat a little more than non-drinkers. Heart rate, sense of exertion, and the time they needed for the route remained almost identical.

Also, the well-being did not change by the changed drinking behavior. Runners without water reported muscle tension after reaching the home straight a little more often. The feeling of thirst was also more excellent among those who had completed the run without a drink.

How can the results be interpreted? It can be said that under the special study conditions and the few participants, no significant difference could be found that speaks for or against drinking during a moderate run.

Whether you want your water bottle to take with you or leave it in your sports bag is up to you. However, the results are not easily transferable to the general public.

If you are one of those who generally drink too little, a full bottle in front of your nose can remind you of this. Then you do not have to drink a water belly against the loss of fluid after training, and your body can absorb the water better.

The lost fluid sweated out during sports must be taken up again. Only with a balanced fluid balance do our cells and organs function properly.

If we don’t drink enough, we become dehydrated. Then the body reports at some point headaches and muscle cramps. It’s best to drink consistently before, during, and after your workout.

The exact recommended amount to drink varies: women need about 2 liters a day when resting, men 2.5 liters, and competitive athletes 3 to 3.5 liters. When you exercise, your body needs more fluids.

How much that varies depending on the intensity of your workout. However, a good rule of thumb to avoid dehydration is to drink before you get thirsty.