These 10 Mistakes You Should Avoid When Jogging 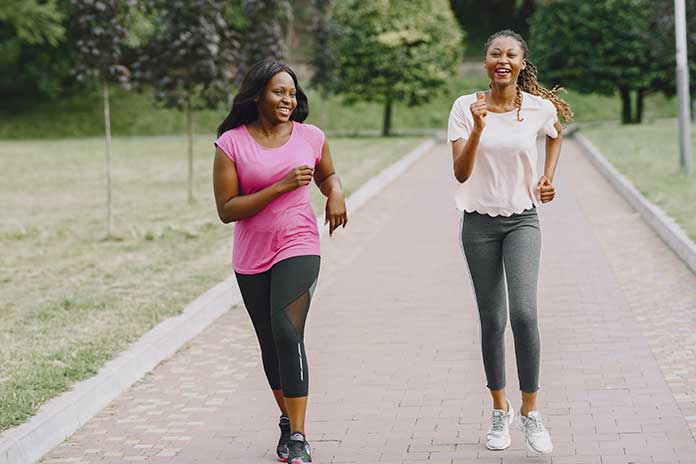 Put your shoes on and go? Well, almost – we’ll tell you what you should consider when training effectively. With our tips, you will learn how to jog properly.

Sure, theoretically, you could go jogging anytime and anywhere, but that’s not necessarily the best for you and the training effect. Otherwise, you feel like so many jogging beginners start running and then wonder why their knees hurt, why they can’t do the lap or why they even go black after the run.

In no other sport is footwear as necessary as when jogging. If you want to protect your joints, you should seek advice when buying and, if possible, do a running analysis because anyone who suffers from flat feet needs different shoes than runners with splayed feet. And those who primarily run on asphalt need more suspension than the ranger.

Don’t forget: The shoes should be replaced with a new pair after a maximum of one year, as the suspension and the sole wear off.

Do you want to get started quickly to be finished quickly? Understandable, but you should begin calmly and only increase your speed after a few minutes when you are warm. Even after the run, you shouldn’t stop suddenly and abruptly, but instead, run out at a leisurely pace and slowly come to a walking speed so that the pulse slowly drops.

Finally, you should do it like a professional runner and stretch your muscles. But note the more complex the training, the gentler the stretching.

Also Read: How To Lose Weight By Walking

Novice runners do not judge how fast they can run and they become overwhelmed. The general rule for beginners: you should run slowly and alternate jogging and fast walking. After a few training units, there are no walking breaks, and the running teams can be increased – also in terms of speed.

Nobody should under-challenge themselves while jogging, but too fast is not good either. Beginners, in particular, should take it slowly. Otherwise, the motor will run out. As a classic tip: You should still be able to chat while you run.

It’s much nicer together! However, the training partner is one of the most common sources of error when jogging. If it is too fast or too slow, it will reduce your performance. Beginners, in particular, should go out on their own and avoid running groups or individual training partners. Otherwise, you are quickly overwhelmed and lose motivation.

Mistake #5: No Water With You

If you only walk around the block for 20 minutes, you don’t necessarily have to have a water bottle with you if you have had enough to drink during the day. However, beverages should be kept in mind for longer journeys – especially on warm days.

You should also drink enough afterwards – preferably water – to replenish your fluid reservoirs.

Mistake #6: Jogging On An Empty Stomach

Those who want to lose weight while jogging or running in the morning like to forego eating and run on an empty stomach. It’s not always a good idea! If you exert yourself too much, your body can go limp, and you go black because your blood sugar level drops too far. Therefore, you should eat a little something before the run, for example, a banana, yoghurt or a fruit and nut bar, for instance, from foodspring. Larger meals should be at least one to two hours ago. Otherwise, they are challenging to find in the stomach.

There was no time all day, so the running training was carried out late in the evening. They will honour you, but it’s a bad idea anyway. After a strenuous exercise, the body is quite overwhelmed and takes a while to recover and come back down. And sleep is usually out of the question after a late evening jog.

Those who go jogging in the evening should plan at least two hours to relax between exercise and sleep.

Mistake #8: Putting Sprints At The End

Pull out all your power reserves and make a quick sprint: That’s okay if you plan to run out for a long time. Otherwise, it is better to keep your hands off it. Who immediately goes into slow-walking after the sprint, overwhelmed the body. Another argument against the sprint at the end: The muscles are then already tired, and the risk of injury increases.

Beginners should ideally ask their doctor if jogging is an option for them. Because if you are severely overweight, for example, you should rather walk at the beginning. That doesn’t put too much strain on the joints. As the weight decreases, the walking sticks can be left out, and the pace increases.

The motivation is great, and so the sports shoes are taken out every day in the beginning. A mistake! Because the body needs recovery phases, at least one day. Then the muscles have time to regenerate, and you do not overwhelm your body. You don’t want to wake up the wretched bastard, do you?

Also Read: How To Improve Your Running Technique?

9 Ways To Prepare For Summer Sports