So Healthy! That Is Why We Should Eat More Olive Oil 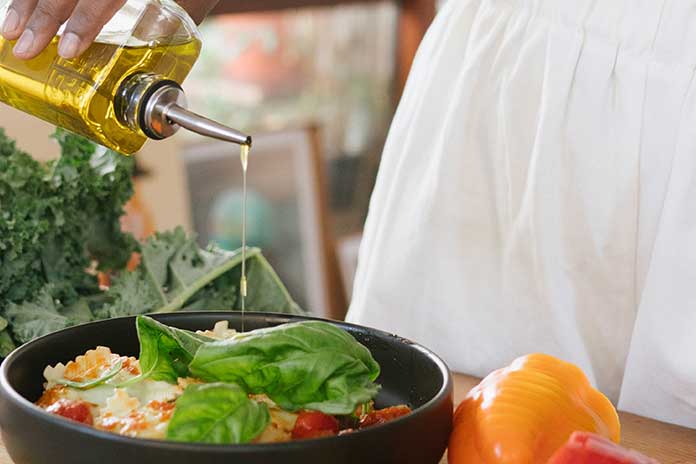 Olive oil not only tastes particularly good but is also considered particularly healthy. And best of all: the oil is also suitable for skin and hair.

Olive oil has been an absolute superfood for thousands of years. To grow as old as possible, the Italians supposedly drink a glass of cold-pressed olive oil every day. The reason: the oil with its slightly grassy-fruity aroma has a unique composition of fats and is supposed to ensure sufficient vitality and fitness – and that into old age.

Nutritionists and medical professionals worldwide confirm that regular consumption of olive oil can prevent numerous diseases and increase life expectancy. The oil is an essential ingredient in the kitchen, especially in the Mediterranean region, but the fine droplets are also used in this country to refine salads, soups, and dips. In Germany, the per capita consumption of olive oil is around 0.85 liters; in Italy and Spain, on the other hand, more than ten liters are consumed per year; in Greece, even more than 20 liters.

What Exactly Is Olive Oil Made Of?

Incidentally, the color of olive oil varies depending on the state of ripeness and can be green-brownish to light yellow. The color does not provide a quality indicator. Still, it does play a role in the taste: While very dark green oil has a strong, fruity aroma, yellowish olive oil tastes riper and significantly sweeter.

Also Read: Ginger Oil: Use Correctly For Health And Beauty

This Is Why Olive Oil Is So Healthy

In addition, the phenol contained in olive oil is said to protect oleuropein from heart attacks due to its antioxidant effect. By the way, unsaturated fatty acids are also found in abundance in avocados and nuts.

A 2015 study published in the journal “JAMA Internal Medicine” aims to show that the risk of developing breast cancer is significantly lower if extra virgin olive oil is regularly consumed through food. However, this assumption is not 100% proven.

By the way, olive oil is not only supposed to protect against breast cancer. In general, unsaturated fatty acids such as oleic acid are said to reduce the activity of a cancer-causing gene in the body’s cells. Therefore, many doctors recommend eating a Mediterranean diet with plenty of fruit and vegetables, nuts, sheep, goat cheese, and fish. Meat, on the other hand, is rarely on the table.

Those who frequently suffer from digestive problems should try olive oil because the oil is considered a natural lubricant that helps move digested food into the colon. The same applies to linseed oil. It is best to consume two tablespoons of oil on an empty stomach before breakfast. Also good: The combination of olive oil with lemon, because it improves liver function at the same time: Put one tablespoon of olive oil and a few lemon wedges in a glass of water.

On the other hand, animal fats can have a severe negative impact on our digestion and organs.

Olive oil is not only good for our digestion and our heart, but it also has a strong anti-inflammatory effect. The oil is said to inhibit cyclooxygenase (COX) enzymes that cause inflammation in the body.

For this reason, olive oil is also often used for rheumatism, arthritis, strains, or other muscle ailments or inflammations. For example, massage the affected area with olive oil can work wonders.

Type 2 diabetes patients should also benefit from olive oil consumption. People affected by type 2 diabetes suffer from high blood sugar levels. The reason for this is insulin resistance. In concrete terms, this means that the body’s cells respond increasingly poorly to the hormone insulin, which usually transports glucose from the blood into the cells. The result: the sugar stays in the blood, and the values ​​rise.

People with diabetes usually take tablets and insulin to compensate for high sugar levels. But there are other means, too – a Mediterranean diet is said to help improve blood sugar control. And it is known to consist of a lot of olive oil!

Yes, you heard right. Although it is always said that too much oil makes you fat, olive oil can help you lose weight – especially on the stomach! The unsaturated fatty acids and the high proportion of phenols stimulate fat burning, and olive oil is also said to help against food cravings. According to a study by the Technical University of Munich (TUM), the oil is said to fill you up particularly well and for a long time.

A group of Italian and American scientists at the University of California also discovered that the unsaturated fatty acids found in olive oil release a specific hormone that reduces appetite. Researchers had previously found out that oleic acid and its messenger substance oleoyl ethanolamide (OEA) signals to the brain that no other food is needed.

Olive oil is not only good for our heart and digestion but also convinces skin and hair care. For example, due to its high nutrient content, the oil gives exceedingly dull, dry, and brittle hair moisture and shine. Massage a bit of olive oil evenly into the towel-dried hair lengths and ends after washing and leave it on for about half an hour under a warm towel. Then rinse thoroughly with shampoo and water.

In addition, olive oil acts as a natural moisture boost for dry skin. Vitamins A and E and the various minerals and fatty acids contained in the oil ensure soft and supple skin. Our tip: Add a few drops to the warm bath water!

The oil can do even more: It is said to be used as a miracle cure for wrinkles and stretch marks and ensure smooth, firm skin. Regular body and face massages with warm olive oil are suitable for tightening certain areas of the skin: Rub a few drops of oil into the palms of your hands and massage the affected area for at least three minutes.

By the way, olive oil is also often used as a lip balm to avoid chapped lips, especially in winter. The oil is also famous for minor wounds, pimples, and skin irritations.

How Do You Recognize Good Olive Oil?

There are various quality labels for olive oil in Germany. Make sure to buy the highest quality, cold-pressed organic olive oil for consumption and skin and hair care. Here you can be sure that the essential nutrients are still included.

The pure natural product is called virgin olive oil. This means that the olive oil was not refined like other vegetable oils but cold-pressed and thus still contains its valuable secondary plant substances.

If the olive oil bottle only says “olive oil,” it is a refined product of lesser quality.