Epsom Salt: This Effect Will Impress You 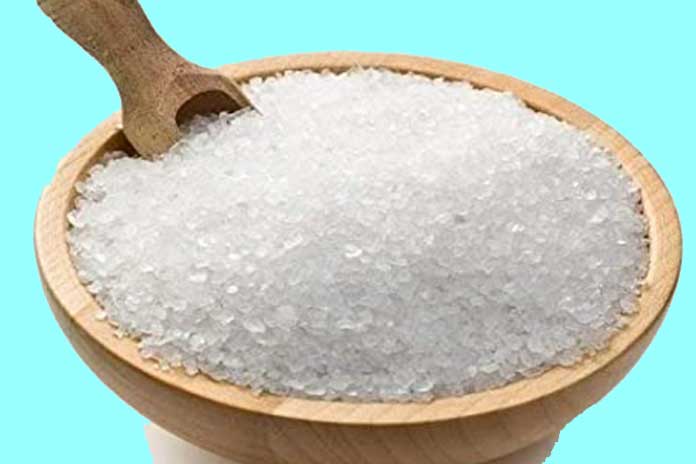 Epsom salt is a popular home remedy that is said to help with all sorts of ailments. Precisely what effect Epsom salt has and when you should use it – we’ll tell you!

Ingested, Epsom salt can increase magnesium levels and help relieve constipation. As a bath additive, it is said to have a relaxing and purifying effect. It should also have a positive impact on the skin.

What Is Epsom Salt?

Epsom salt has nothing to do with conventional table salt used for cooking. Only the crystalline structure is reminiscent of ordinary salt. Epsom salt is a chemical compound of magnesium, oxygen, and sulphur and is therefore known as magnesium sulphate.

How Is Epsom Salt Used?

External Use Of Epsom Salts:

Epsom salt is often used as a bath additive. The bath salts help against sore muscles and cramps, but there is no scientific evidence for this. Epsom salt is also said to help with various skin ailments.

Many a beauty also swears by Epsom salt powder as a scrub.

Internal Use Of Epsom Salts:

Many people suffer from magnesium deficiency. One way to offset this is Epsom salt, which is then taken as a dietary supplement.

In the US media, in particular, it can be read repeatedly that many celebrities quickly use Epsom salt baths to slim down for an appearance on the red carpet. However, the effectiveness of Epsom salt has not been proven.

As is so often the case with home remedies, some swear by them and those who don’t believe in them at all. Many who swear by the home remedy believe that a bath in Epsom salts has many health-promoting properties. Supporters attribute it to the magnesium and sulphate it contains and claims that the ingredients are quickly absorbed through the skin. Epsom salt is also said to help with weight loss.

According to a 2016 study, there is no clear scientific evidence that magnesium can be absorbed through the skin. The study was published in the ‘Journal of Nutrition & Food Sciences. Researchers said there was a smaller study from 2009 that also found no evidence that skin absorbs magnesium.

On the other hand, a study from 2017 found that subjects who tested a cream containing magnesium had an increased magnesium level in their urine.

Despite the contradictory scientific view, Epsom salt as a bath additive is low-risk. If you want to try out for yourself, whether an Epsom salt bath has a positive effect on your health or even helps you lose weight, you don’t have to fear any disadvantages.

What Is The Difference Between Epsom Salt And Glauber’s Salt?

Unlike Epsom salt magnesium sulphate, Glauber’s salt is sodium sulphate. However, both salts work and taste similar. They are diluted with water to clean the intestines and used as a laxative. The taste is bitter and very salty.

Incidentally, Epsom salt is also often found in plant fertilisers. If you also want to give your plants a beauty treatment, you can dissolve a tablespoon of Epsom salt in the flower water once a week and water it with it.

Also Read: What To Do In Case Of Shock